FINAL ZONING REGULATIONS CERTIFIED AND PRESENTED TO BOARD OF JOHNSON COUNTY COMMISSIONERS ON MARCH 18, 2014

Copies of the final regulations are available in electronic form on this website (see Planning & Zoning Documents page).  Electronic copies on disk (CD) can also be acquired at the Johnson County Planning Department office at 26 N. DeSmet Street in Buffalo, WY, by calling to (307) 684-1907 or by email to jwaller@nulljohnsoncowy.us.

Printed copies of the final regulations are available at the following locations:

Copies of the draft document are also available via the following methods and formats: 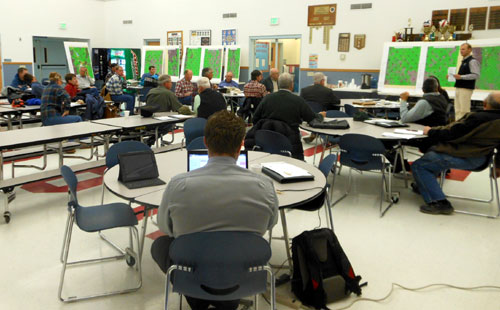 The Johnson County Planning Department is currently revising the Johnson County Subdivision Regulations, which have not been revised since their original adoption by the Board of County Commissioners in April of 1996.  Four separate amendments to the regulations have been adopted since 1996.  The revision is being done to:

Planning and Zoning has been working through changes during 1 hour work sessions prior to each regular scheduled meeting and as a regular agenda item.

Public hearings will advertised and held by the Johnson County Planning and Zoning Commission and Board of Johnson County Commissioners, and public comments will received and considered prior to adoption of the revised regulations.